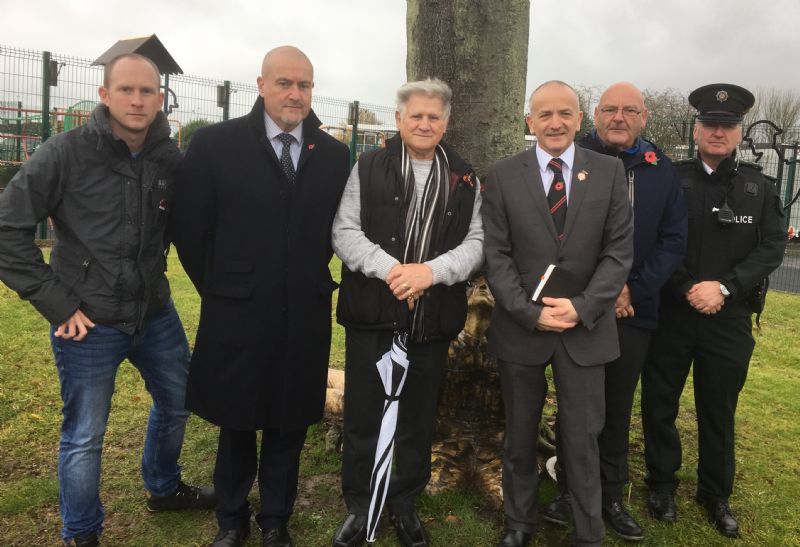 Mark Tatty Gordon was invited to conduct a short 'Community Remembrance Service' in Kilcooley this morning to mark 100yrs since the signing of the Armistice and the end of WWI.

Beginning the service Tatty thanked Kilcooley Community Forum for inviting him to conduct the service and thanked everyone who attended to pay their respects.

Tatty pointed out that many of the local volunteers who were sent to France and Belgium to fight in WWI, were trained in Dufferins Estate, just meters away from the site of this memorial.

He went on, "Jesus was eating His last meal with His disciples before He willingly laid down His life as a sinless sacrifice for mankind's sin."

He then read from John 15v9-14 and emphasised these words of Jesus:

“Greater love has no one than this, than to lay down one’s life for his friends.”

“Greater love hath no man than this, that a man lay down his life for his friends.”

Tatty said, "Within hours of speaking these words, Jesus would sacrifice His life for His friends!

100yrs ago, at 11.00am on the 11th day of the 11th month, WWI ended when Germany signed an Armistice. (Agreement to end hostilities & establish peace) This Armistice brought to a close 4yrs of war which saw 9 million combatants and 7 million civilians die.

The former British Prime Minister David Lloyd George is reputed to have said about WWI, “This war, like the next war, is a war to end war.”

From 1914, down through the years to the present day, many men & women of the British Armed Services and local volunteers, among others, have sacrificially laid down their lives to preserve the civil & religious freedom we enjoy today.

Theirs is the ‘greater love’ of which Jesus spoke.

“Greater love has no one than this, than to lay down one’s life for his friends.”

“Greater love hath no man than this, that a man lay down his life for his friends.”

Through their blood sacrifice we have life and liberty!

We owe them a debt we cannot repay, but we honour them in our acts of remembrance.

Today we honour them for their service & thank God for their sacrifice.

But above all we remember the sacrifice of Jesus who laid down His life for His friends, that those who believe in Him might live."

At this point Mr Thomas Crawford laid a poppy wreath at the memorial stone, after which the 'Ode to Remembrance' was delivered and the service closed with prayer.

Tatty thanked Mr Alan Bell, a local resident and the artist who created the sculpture 'Wooden Warriors' and also thanked the Kilcooley Men's Group for their work and NIHE for allowing the land to be used for the memorial purpose.

Afterwards light refreshments were served in the Square Centre cafe.