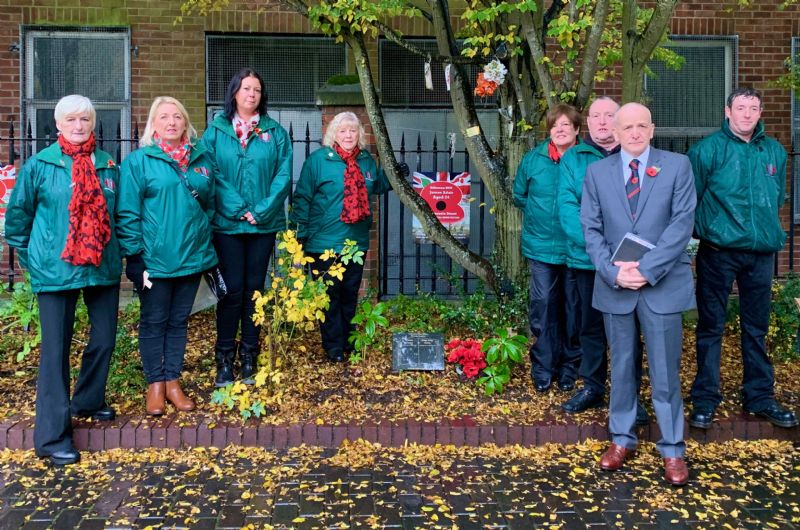 Mark Tatty Gordon was invited to conduct a number of Remembrance Services this year, including a Dedication / Memorial in the Shankill Memorial Garden (Sat 9th), in West Winds (Sun 10th) at Shiloh that evening and again on Armistice Day in Kilcooley.

Each service began with the same reading from Ecclesiastes 3v1-8 and all services focussed on these words.

Below is the message spoken at Shiloh.

"I’ve been privileged to have been asked to conduct a number of Remembrance Services this year, including on the Shankill, Newtownards and in Kilcooley tomorrow morning.

At each of these services I’ve read or will be reading the same passage of Scripture from Ecclesiastes 3.

Written by the wisest man that ever lived, King Solomon is clear, nothing in this life stays the same, nothing lasts forever.

“There is a season, (he says) a time for every purpose under heaven.”

Yet with every war or conflict come fatalities & casualties, & we who benefit from the sacrifice, service & victories others gained on our behalf, are duty-bound to honour their memory & maintain their legacy.

Lieutenant-Colonel John McCrae reminds us in his poem ‘In Flanders Fields’ of our responsibility.

“Take up our quarrel with the foe:
To you from failing hands we throw the torch;

Be yours to hold it high.
If ye break faith with us who die
We shall not sleep, though poppies grow
In Flanders fields.”

But war & conflict also bring into view, the comradeship, commitment & courage of those who stand united to defend our country against all foes.

This evening, as we remember the glorious fallen of WW1 & WW2, so we honour also those who in recent conflicts who paid the ultimate sacrifice.

We pay tribute to the servicemen/women of the Royal Ulster Constabulary, Ulster Defence Regiment & the Royal Irish Regiment, whose dedication & loyalty helped preserve our freedoms.

We honour the members of Her Majesty’s Security & Armed Forces currently serving at home and abroad.

“The legacy of heroes is the memory of a great name & the inheritance of a great example.”

These words by former British Prime Minister Benjamin Disraeli were spoken approximately 40 years before the Great War, prior to so many gallant men of the 36th Division (Ulster Volunteer Force) leaving these shores for England & on to France, to resist an enemy of the Empire.

Their love, loyalty & sacrifice, remains their legacy for our freedom from any & all evil oppressors!

Their brave blood sacrifice should spur us on to defend the freedoms they purchased for us.

We are duty bound to guard what they have entrusted to us.

(I’ll say it again)  “The legacy of heroes is the memory of a great name & the inheritance of a great example.”

Disraeli’s words resonate down through the generations to this night.

And in our Act of Remembrance, honouring those who’ve served & all who continue to serve to defend our democratic freedoms & way of life; we pay tribute to the heroes of the UVF of yester-year and Her Majesty’s champions of peace, who down through the years have sacrificed so much to ensure we can live in freedom.

Their courage testifies, that to take a stand for truth & freedom is a small price to pay to uphold & maintain their great name & the inheritance they’ve entrusted to us.

Their legacy, their great name and heritage we must not allow to be maligned or forgotten, but rather honoured, and safeguarded.

Billy Graham the Christian evangelist said, “Courage is contagious. When a brave man takes a stand, the spines of others are often stiffened.”

As we remember those who’ve died and hope and trust they are in God’s keeping, may their legacy spur present servicemen & women fearlessly onward, to continue to protect & preserve the freedoms we enjoy.

King Solomon is right to say, “There is a season, a time for every purpose under heaven. A time for war & a time for peace.”

But King Solomon also makes clear there is, ‘A time to be born and a time to die.’

It doesn’t take the wisest man that ever lived to make us understand this, we all know it to be true.

But King Solomon having pondered life with all its questions and complexities, also said these words.

“Remember now your Creator in the days of your youth, before the difficult days come, and the years draw near when you say, “I have no pleasure in them”.”

“Remember now your Creator in the days of your youth!”

Most of us here have passed this stage in our lives, we’ve gone beyond youth and the difficult days are upon us or are coming.

As we get older we can allow our hearts to become calloused to God and the things of God.

We can lose hope in God as we experience the difficult days of life with all their challenges.

But, “there is a season, a time for every purpose under heaven. A time for war & a time for peace. A time to be born and a time to die.”

Nothing in this life stays the same, nothing lasts forever.

Even the memory of those who in war and conflict sacrificed so much for us, will like our own memory eventually fade away.

Nothing in this life stays the same, nothing lasts forever.

King Solomon’s final words on the matter are these.

“Fear God and keep His commandments, for this is man’s all.  For God will bring every work into judgment, including every secret thing, whether good or evil.”

Solomon is telling us, “Know God now and be at peace with Him because a day is coming when you will have to give account to Him.”

Whether we face good or difficult days, whether we are called to endure war or enjoy peace, this too shall pass and one day we will have to stand before God our Creator.

On that day the only question that matters will be – what did you do about Jesus?

If we allow life with all its questions and complexities to callous our hearts to God, and we ignore His only means of salvation, which is faith in Jesus, then we die as hopeless people.

But there is hope in this war torn, conflict-ridden world – it’s truly only found in Jesus; a hope that surpasses death and leads those who take a hold of it through death and into the world to come.

You can take a hold of that hope tonight by confessing your sin, repenting and trusting in Jesus to save you.

“Remember now your Creator… before the difficult days come, and the years draw near when you say, “I have no pleasure in them.” Fear God and keep His commandments, for this is man’s all. For God will bring every work into judgment, including every secret thing, whether good or evil.”

“Courage is contagious. When a brave man (or woman) takes a stand, the spines of others are often stiffened.”

Will you take a stand for Jesus tonight?"